Please fill up the form below:

Please fill up the form below:

Shybo, a small robot to think with 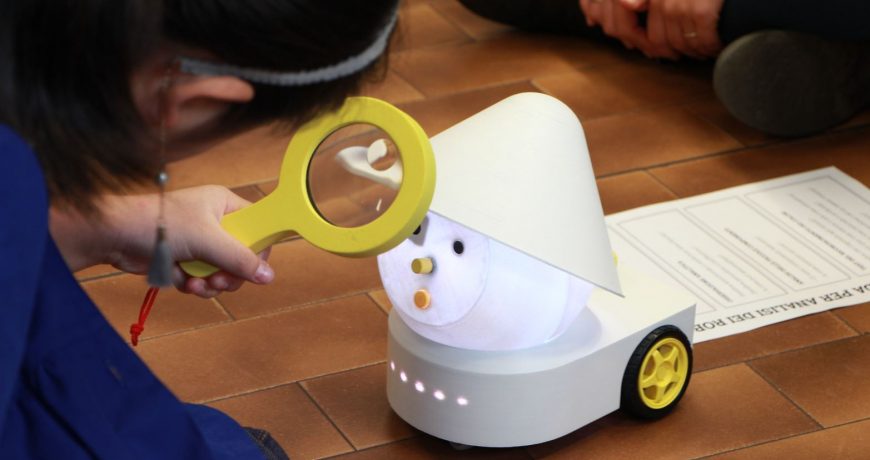 Shybo, a small robot to think with

This project started from an investigation of the role of artefacts in supporting children’s reflection, and of how the specific case of a robot that learns may introduce new opportunities.

In the last decades the relationship between thinking and the human interaction with things was greatly enriched by the diffusion of computational technologies. These, in fact, represent a means through which we think and elaborate concepts like numbers, space, time, and causality. Thus, artefacts can be specifically designed for fostering different kinds of thinking, from mathematical and computational to critical thinking on themes like agency and identity.

In Shybo, the idea of supporting the construction of knowledge and reflection on identity were addressed through playful learning activities specifically designed for primary school groups.

Together with Annalisa Gallo, didactic manager of 10100Percorsi, and Lorenzo Romagnoli, a creative technologist, we organized a three day activity in a primary school in Torino (Italy), where children were challenged to discover the functioning of the robot and to find out where it came from. The robot, in fact, was introduced to children through a little pretense: it was found in the garden close to the gate of the school and seemed to be lost.

In the activities, children tried out different types of interactions with the robot, and discovered that it had memories stored in the form of sound tracks and images. By combining this information, and exploring their neighborhood with Google Maps, they reconstructed the journey of the robot and found out that it was coming from the university. The memories where used as a trick to connect the activity with real elements in the neighborhood that were selected because of their connection with relevant topics, like the history of the city, the local culture and sustainability.

Shybo is a robot designed to be used as a character for stories in which a crucial role is played by the educators that drive the activity. Through a story, the robot becomes a means for addressing different topics and reflecting on the identity and functioning of things around us.
.

About Maria Luce Lupetti
I am a designer and Posdoctoral researcher at the Connected Everyday Lab, TU Delft, Netherland. I’m working on the Things as Citizens project, focused on the investigation of near future scenarios of coexistence between people and autonomous things in smart cities. I did a PhD in Design for Service Robotics and my doctoral research focused on human-robot playful interactions.
.